10 underrated horror films from the 1970s

The 1970s were a turning point for horror cinema, with its stylised richness protruding as a primary ground layer for the progression of the genre. Although not as bloodstained as the following decade, the films did ambitiously introduce audiences to a more gruesome and barbaric taste for cinema. It’s this slow burning horror that craftly handled savage imagery alongside sophisticated haunting visuals to create exciting films whose reputation has lingered long within the horror genre.

However, the 1970s were a time of classics that have almost stolen the spotlight off of many underrated films that deserve just as much recognition.

Instead of focusing on the immensely successful Halloween (John Carpenter, 1978), The Exorcist (Willam Friedkin, 1973) and Alien (Ridley Scott, 1979) this list will cover the forgotten wonders of such an influential decade.

In rural 17th England a small village’s harmonious layout is disrupted when local farm landsman Ralph (Barry Andrews) unearths a decayed unidentified skull within the land. The discovery summons evil to the area, with the youth of the village soon inhabiting the role of devil worshippers to raise hell on earth.

This film belongs to the unholy trinity of folk horror, with the other two films being Witchfinder General (Michael Reeves, 1968) and The Wicker Man (Robin Hardy, 1973). Throughout The Blood on Satan’s Claw Haggard attempts to mimic the liberal attitudes from communities of the late 1960s through the metaphorical demonisation of such attitudes. The ‘hippie brigade’ from the prior decade became somewhat of a moral panic, but in reality freedom was their primary motive. And quite literally this film uses the devil worshipping children as the antagonists to mock the rather absurd reserved opinions of the time.

Its not just the critical commentary that makes this film rather significant to seventies horror, its also the haunting use of folk elements to illustrate the horror. There is an essence about rurality that fashions the countryside as being dark and tempting, the rooted soil comes across as mysterious, with the forest being witness to all kinds of satanic rituals over time. The Blood on Satan’s Claw rejuvenates fables as a horrific curse set upon any form of society who is brave enough to set foot on its historical land. 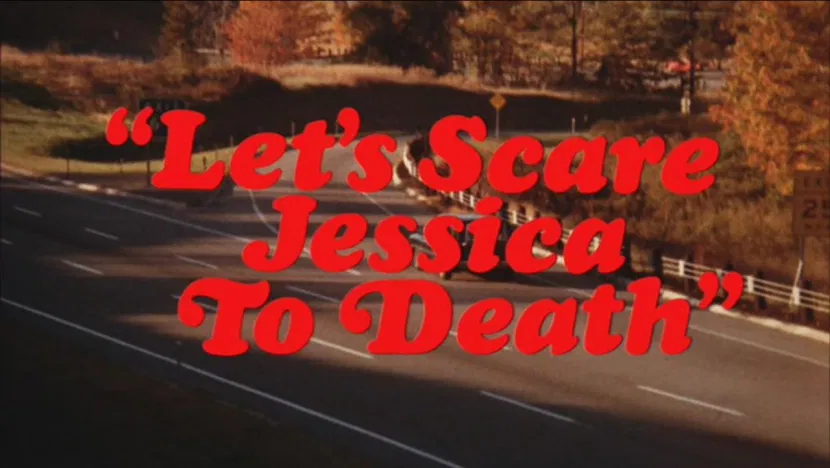 The film follows Jessica (Zohra Lampert) who has been recently released from a psychiatric institution. To get a fresh start Jessica alongside her husband and a friend move to a secluded farmhouse. After finding the beautiful Emily (Mariclare Costello) already occupying the house Jessica sympathises and invites her in. But, of course it’s not long until the new beginning loses its balance as strange occurrences begin to stir. Let’s Scare Jessica to Death premise is simple at its roots, but the horror that ensues is far from ordinary.

The film builds its tense infrastructure upon the questioning of whether the horrific events are just psychological delusions of Jessica’s, or are they actually threateningly real. Hancock achieves a multi-layered fright fest through the elaborate combinations of evoking visuals as well as a gradual untrusting story path.

The audience question the direction of the film, is Emily’s presence truly evil or is she an innocent young woman being persecuted for unsettling legends. All of this is executed through such a poetic form that gently presents a foreboding horror that seems to leap into true terror out of nowhere shocking audiences and leaving its mark.

Don’t Torture a Duckling is a classic Giallo film that follows the sleepy and mystifying town of Accendura in Italy whose occupants have been plagued by a series of child murders. Giallo cinema is richly dense in stunning sights and graphic imagery showcasing alluring women with a wash of vulgarity and voyeurism. Fulci takes these aspects and runs with it, not only does the film showcase these elements, but it also combines a typically unpalatable narrative to create a unique film that excels both visually and narratively. The murder mystery element is not lost amongst the horror as the whodunit aspect remains strong throughout. This rare element of excelling in every aspect is one that Fulci seems to achieve so flawlessly.

Somehow he weeds through the juxtaposed subjective themes of secretive perversion amongst a backdrop of glowing rural Italy with ease.
The Giallo movement erupted in the 1970s thanks to Fulci, Argento and Bava. With the archetypal eye trauma, gore and noir-esque quality becoming rites of passage in each film. Yet, Don’t Torture a Duckling drew away from these moulds through the heavy focus of psychological terror of child innocence being corrupted.

Legendary director Brian De Palma brings us Sisters, a dark horrific thriller that follows a journalist as attempts to investigate a murder that she witnessed. Sisters is a deeply analytical film that takes clear inspiration from Hitchcock’s auteur framework through the transparent use of voyeurism as a storytelling tool. Despite the clear homage the film is still an elaborate horror within its own right, not only does it feed through a complicated narrative without confusion, De Palma additionally conveys a morbidly lit psychological film that remains incredibly influential.

But one aspect that truly surges the film’s solid reputation as a tour de force within horror is the striking medley of exposition performed through aspects such as split screen, alternating aspect ratio and colour transitioning. This bounds the viewer in a lucid trance whilst watching, all the whilst disrupting any sense of familiarity or ease.

Dr. Hess Green (Duane Jones) is stabbed by an ancient blade that transforms him into a bloodthirsty vampire. Soon after he meets the beautiful young woman Ganja (Marlene Clark), who is yet to know of his dark secret. This film belongs to the extremely underappreciated blaxploitation subgenre of horror. Ganja and Hess is a tale of vampirism through an experimental framework. Unfortunately, the film has been considered dated, with poor cinematography tarnishing its reputation; however to look at it in an alternative light it could be argued that the use of negative space and burnt imagery contributes to the overall feel of the film.

Gunn uses the age old tale of the vampire to portray a love story built upon fractious grounds. It’s this amalgamation of romance and horror that contribute to the surreal avant-garde quality that thrives throughout. This heavily surreal atmosphere makes it a standout film that provides an artistically strong piece of cinema that pushes it ahead of its time. Ganja and Hess certainly stands out due to its arresting tones of addiction and the struggle that inherently accompanies eventual redemption.

The film follows Henry Spencer (Jack Nance), a doomed factory worker who lives in an industrialised city. His hapless life soon takes a turn for the worse as he attempts to care for his mutant screaming newborn. Eraserhead defies all expectations as the desolate horrid environment encapsulates the hallmark disastrous aesthetics that Lynch so flawlessly pulls off. The film is an exercise of disturbance through a nightmarish world that disavows comfortability and reassurance.

The distorted reality is placed upon the viewer; not once are we sure of the surroundings, everything is the opposite of home and nothing steers away from the bizarre. In retrospect the film is anything but enjoyable, but due to Lynch’s engagingly ineptness we cannot help but stare at the dystopian story presented to us.

House follows a group of schoolgirls as they travel to a country home, however it’s soon discovered that the house is haunted. House is a complete fever dream that toys with the viewers perception of reality throughout the entire film. The generic title and concept is not to be underestimated as it gradually becomes one of the most nightmarishly ambitious films of the entire decade. It uses almost every special effect available at the time including animation, backdrop paintings, collage animation and blue screen.

Alongside, the enigmatic visuals are the deeply laden cinematic storytelling methods. Obayashi was contacted by Toho Co. (producers of Godzilla [1954]) to make a film that mimicked the success of Jaws (Steven Spielberg, 1975). And Obayashi did just that; House was a box office success in Japan, but it was gravely crucified by critics. And it seems that these reviews had somewhat plagued its reputation as the film has seen only a cult status keep it alive.

Tourist Trap follows a group of friends as they become stranded at an isolated museum filled with creepy mannequins. Their fate soon takes a turn for the worse when the mannequins seemingly come to life… Tourist Trap owes its ferocity to its clear inspirations from classic gothic horror and road trip films.

However, rather than directy take or use these elements to create a typical horror that has been seen countless times before, Schmoeller twists these tropes to create a horrifying slasher hybrid with dark comic factors thrown in for good measure. The horror within Tourist Trap is highly reliant upon atmosphere and tone, and the dingy setting of a secluded museum immediately sets up a haunting vibe that exemplifies terror.

George A. Romero was one of the most influential horror directors, with his foreboding Night of the Living Dead series being the most iconic zombie franchises of all time. But, for a director as prevalent as Romero, Martin receives so little recognition. The film follows Martin (John Amplas), a young man who is convinced that he is an Old World vampire. And as vampires do he ruthlessly engages in the act of blood drinking. As with most of Romero’s filmography there is a fair share of social commentary as well as generous gore.

The film does not fall victim to the highly conventional portrayal of vampires by romanticising them as some sort of medieval lustful soul. Instead Martin is a pure villain, who despite him being the central character is a twisted depressed man who does not think twice about raping one of his victims. What makes Martin a strong contender within 1970s horror is its balance between presenting the mundane and then switching to provoking horrid scenes within the flick of a switch.

The film follows Girly (Vanessa Howard) and her brother Sonny (Howard Trevor) as they lure unsuspecting victims back to their house to Mumsy (Ursula Howells) and Nanny (Pat Heywood) to play a twisted game of happy families. Francis based the film upon a play by Maisie Mosco titled ‘Happy Family’, whose influence remains strong throughout the film.

Francis’s vision of Mosco’s work is criminally underrated as it receives little attention despite its fantastically twisted story that is the groundwork for many psychopathic family based horrors. At the time of release Britain was a divided nation between audiences who encouraged liberal cinema and those who fought against such ‘indecency’. And Francis’s film played with this battle with strong themes of incest and suggestive relationships being hinted at throughout.